The day I tried pho was the day I realised that soup could be loved. There’s just something about pho that elevates it beyond its competitors. It’s rich and fragrant yet still light.

There’s a little vegan restaurant in Sydney that makes the best pho I’ve ever eaten. Even better than beef pho and I promise that’s not a lie. I used to live 10 minutes away from that little hole in the wall and it was heaven devouring a bowl of their goodness. Now that I’ve moved, said place is an hour away from home. Since my dreams started being all about that pho, I set out to recreate it at home. Add halved onions and ginger pieces to a large soup pot over a high heat. Let sit until charred and almost burnt.

Then, add leek, carrots, green cabbage, daikon and mix until evenly coated with spices. Add vegetable stock and stir then bring to the boil.

Once boiling, reduce to simmer and add gluten-free soy sauce as well as nutritional yeast water (NOTE: do not add sediment). Simmer for 2 hours.

While simmering, prepare other ingredients for plating in bowls.

Once cooking time is complete and the broth is fragrant, strain through a sieve and discard solids. Then, pour the broth into prepared bowls and serve. 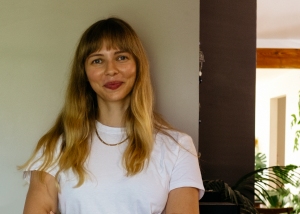